So many people thank me for being transparent. Well, buckle up. It’s been a bad week. I remember reading on Facebook this week “It’s a status, not a story.” Some people have a story and I’m thankful I can use this blog as my outlet. Believe me, I have several in edit form that have not been posted. They have not been of God. Seriously. I told my Pastor that if I would have hit send on one, people would have thought someone else wrote it.

You might wonder why has it been a bad week. My mother is in poor health and we are moving her into an independent living facility. It’s not her ideal situation, but what she does not realize is that she will be well taken care of, meet so many new friends, and I believe she will begin to thrive again. We have had many doctors appointments with Collin (sorry, not going there). Just pray for our buddy as we go down a new road with another diagnosis – narcolepsy. Suffice to say, I’ve had a migraine everyday and even a block in my head did not work. Just a lot on the Erwin plate.

As we were working through some things this week and I was talking to my sister, I had to tell her that I was looking at Trey’s last instagram picture and there were comments on there as of one week ago. Yes, one week ago. This picture has over 1200 comments. It was 11:20 p.m. and I was reading and reading. This was Monday night. I reminded my sister that even though we are dealing with all the things on the outside, when I wake up, I think of Trey – because I hear the bus outside to pick him up (It still goes by at the same time). When I go to bed, I think of Trey because he would be doing his homework because he would have been at football most of the afternoon.

So, why such a bad week? It’s Collierville’s homecoming. I’ve pondered it all week. I’ve looked at all the pictures and loved them. Then comes the thoughts that you don’t want to think. Would he have been asked to escort someone? Who would he have asked to homecoming? What would she have worn? I promise you, it’s a crazy road and I cry out to the Lord.

Yesterday, God spoke very clear through an envelope. I didn’t even open it. It was a college admissions letter to The Parents of Trey Erwin. I had to laugh. I posted it on Instagram, of course, and made the reference that they had not received the news…Trey is already an alumni from the University of Tennessee courtesy of the alumni association. I know we will be receiving more letters and it’s okay.

Today, literally, this afternoon as I was praying, I was asking God how did Mary and Joseph handle it? I just needed a little relief. Just a little. When you have lost someone you love, one of your greatest fears is that they will be forgotten. More than that, you will forget. The fear is stifling sometimes that you will forget the little things. If I have that fear, then why would he cross the mind of others? I was picking up Collin at football and I get a text from Sonya Luna that said there is a happy in your mailbox. I told Collin it was cookie dough! We get home and she and Madison had bought me a Hakuna Matata t-shirt they found and Madison had bought herself one. God’s timing is ALWAYS perfect. ALWAYS. I immediately sent her a text and told her what an answer to prayer this was. Her response, the purchase was on her part an act of following through on prompting because she never knows what God has planned for the person on the other end.

It’s amazing how God loves on me. Especially when I don’t deserve it. I can be so selfish – wanting my boy back. But today, I kept going over and over in my head, homecoming, homecoming. That word just kept spinning in my head like a merry-go-round. Finally, I looked up several definitions of the word homecoming. The first thing you think of is sports and alumni. Here are several definitions – the arrival at home of someone who has been away; return home; and my favorite, arrival at home. Homecoming? Sure I’m sad. But I think Trey has had his homecoming. A grand one at that. I just think God wanted him to come home.

Another friend, Ashley Arthur, posted tonight how she tears up every time she hears 10,000 Reasons. I told her that I definitely understand. I wish everyone could have been present during Trey’s homecoming. St. Jude and many others have said that it was an experience they have never witnessed. I can honestly say I have never, ever felt the spirit of our living God so alive in one place. I don’t think I’ve blogged about this, at least I’ve tried to keep it private, but we have heard from Matt Redman. He did reach out to us after Trey’s homecoming. Some of you may not know, but Matt Redman wrote 10,000 Reasons and Trey passed away during the last very of his song. I’ll attach it so you can hear it. I may have attached it before. I think in December. But it’s worth hearing again!

OHHHH, you are not going to believe this. I just received an Instagram alert from someone asking on one of my pictures (that was the last picture I took of him in the hospital) – “How did he die?” That picture talks about his “homecoming!” Collin and I just had the discussion about this blog. I met with a client today who realized I was Trey’s mom and she was so touched by his story. I told her, I will never stop telling His story and how He did a mighty work through Trey. That does NOT make me strong. It just requires me to be obedient. God requires obedience from all of us. When I stand before God on that day, I pray He will say to me, well done.

This minute, I’m okay. Tomorrow, I don’t know. But one thing I do know, homecoming for me has a different meaning and always will. Arrival at home. Eternal home. This is not my home.

And on that day when my strength is failing
The end draws near and my time has come
Still my soul will sing your praise unending
10,000 year and then forevermore

It’s late. Very late. And this blog will be random and not well thought out beforehand like most of my blogs. Tonight was an emotional night. Collierville played Germantown and Collierville won 14-7. It has been years since we have beat Germantown. Good job coaches!!!

I was able to have dinner with the senior football boys last night. There was laughter, food, and vicious ping pong. Isaiah Downey invited Collin and picked him up and we were invited as a family. You see, that’s not the first time Isaiah has come by the house to get Collin. He took him this summer to the movie and was at our house to celebrate Trey’s one year homegoing.

Just a special time last night. One mom mentioned how last game the boys walked off a different way and she didn’t get her sweaty hug from her son. I remember those. I miss those. Matter of fact, as most of you have seen, that’s my favorite sweaty picture with Trey. I started talking with the two mom’s and we talked about how long our boys had been together. I shared the story of when Trey and Corbin Peeper played on the same basketball team at GBC and Jim, Corbin’s grandfather, and Tara, Corbin’s mom were their coaches. I told them how they would have to take Corbin out of the game because he would get so angry and intense. The boys had to be 7 or 8. Jim ended up baptizing Trey at Trey’s request and when Trey was sick, Jim might have missed sitting with us only once during tests or treatment. Such a special history.

So tonight, the air was thick. The boys were anxious to win. Before Isaiah and Corbin entered the Dragon tunnel tonight, i pointed at them as to say – it’s your night – and they pointed right back. I think that the majority of the team would agree when I say Isaiah had a heck of a game. There were tackles, blocks, an interception and hands in the air with #13 shown.

I know there were friends of mine there that normally do not come to the Collierville games. I was talking with Coach Kyle Reed, one of Trey’s favorite coaches and a man of God during the game. We talked about how the atmosphere was Trey’s place. It’s where he belonged, he lived, he learned and we talked about those things. The songs that were played were Trey’s songs, #13 in the air, painted on the field, on flags, and yes, painted on bodies. But those were the people that knew Trey. When I talked to the senior boys last night I told them that the one thing Trey was worried about was Collin. I challenged them to be an example on and off the field. And I got the chance to tell, just the senior boys, Trey’s teammates, how much they meant to us. And no, I did’t hold it together. But that’s okay…

After the game, with raw emotions, a football player walked directly to me and as we hugged, our tears began to fall. He cried out of joy for the win, out of loss for his friend, out of love for his friend’s mom…and I was holding my boy again. I got that sweaty hug tonight, from Isaiah Downey. He wasn’t concerned about his man card. The last football player to be by Trey’s side within the hour of his death. And then they came, one after another, sweaty hugs. You may think this is gross, but I came home and didn’t take a shower. It’s HIS smell…sensory grief. My only regret, Jay had to work and could not share it with me. Next week, we’ll both get sweaty hugs.

Dragons-The Erwin family loves you! Trey will always be with you! 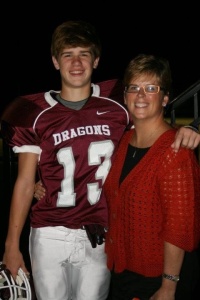 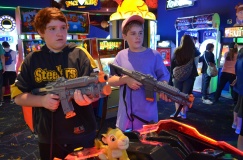 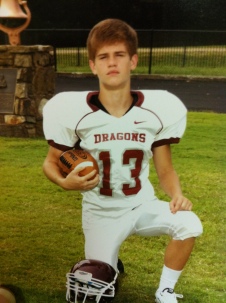 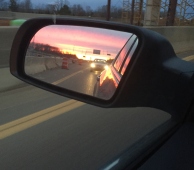 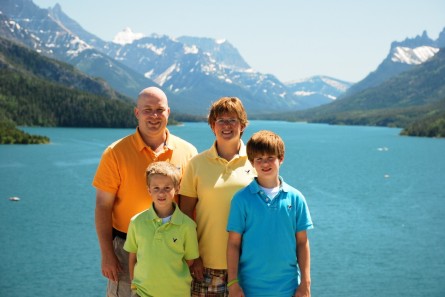 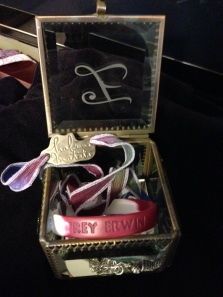 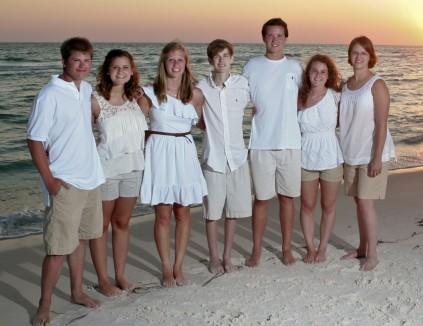 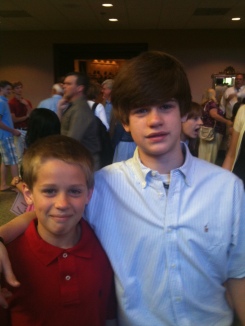 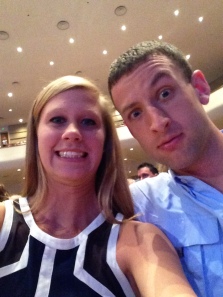 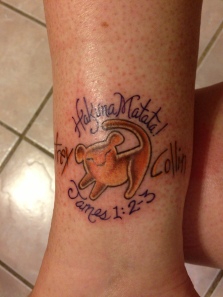 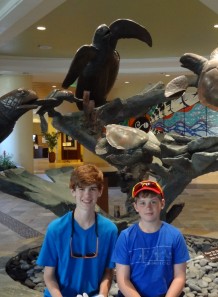 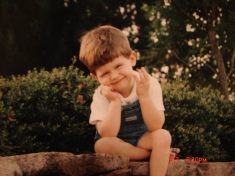 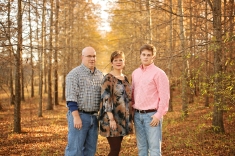 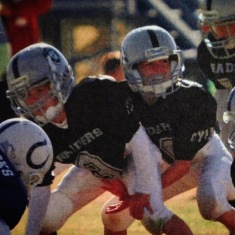 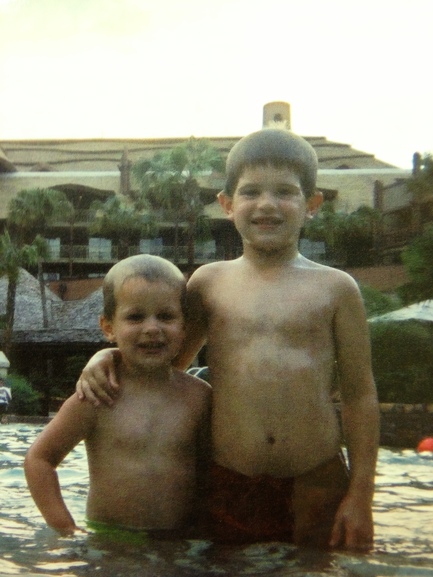 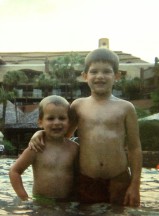 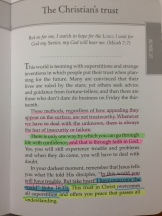 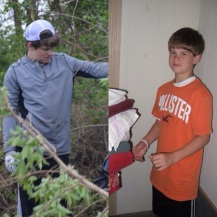 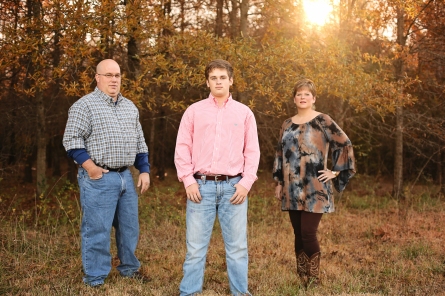 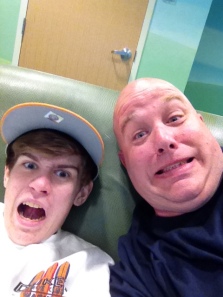 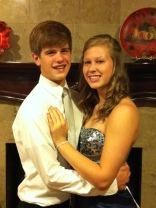 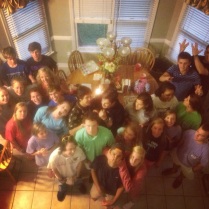 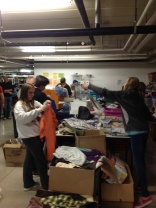 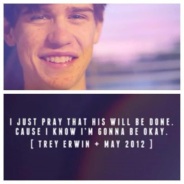 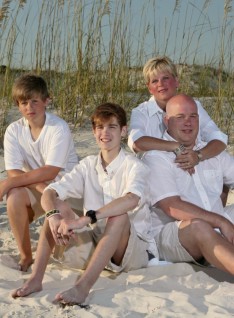 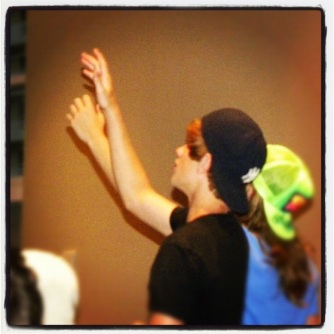 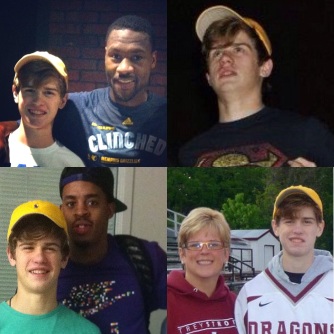